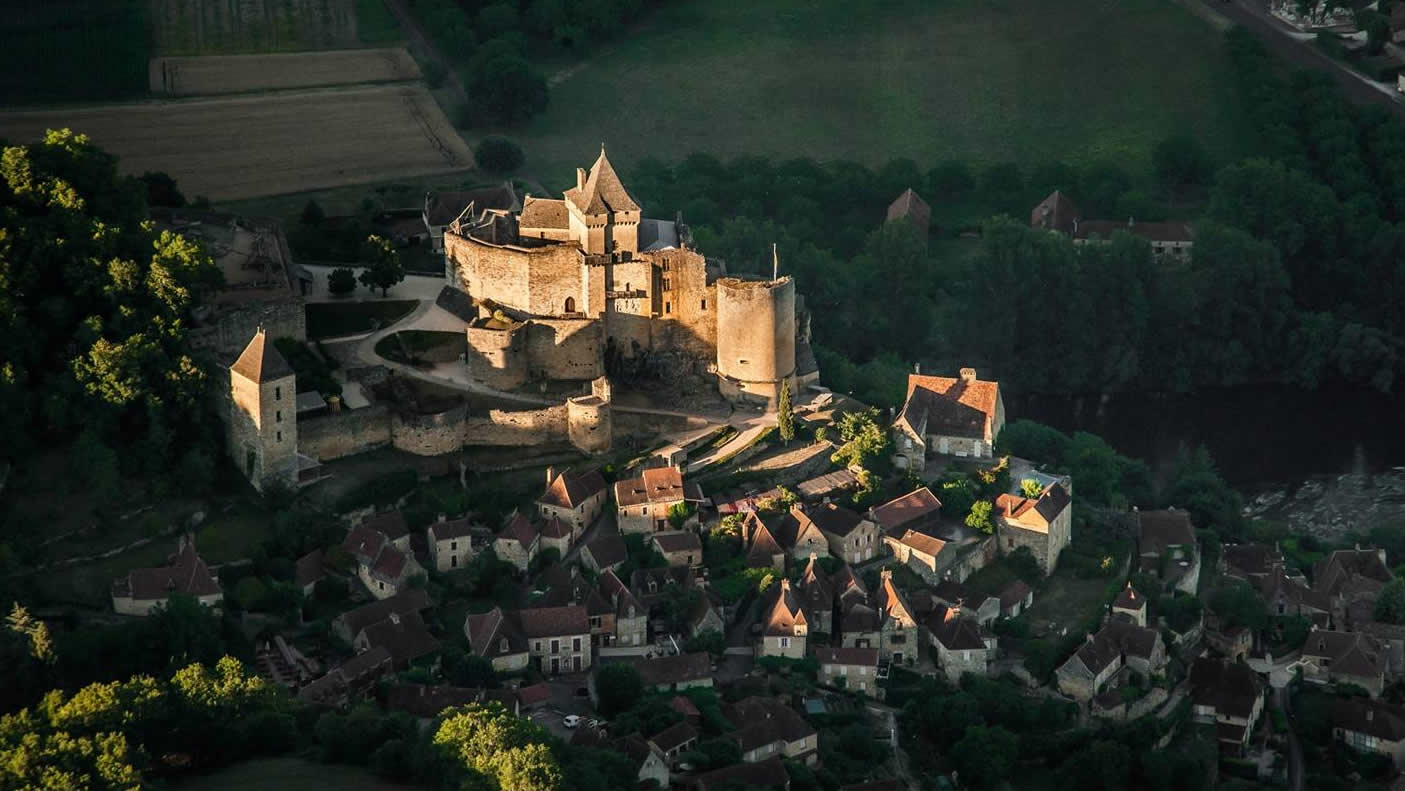 Through this article, we wish to introduce you this authentic region with its quiet and unspoilt natural surroundings.

Located in the South West, criss-crossed by the Dordogne and the Vezere rivers, the Black Perigord is one of the most beautiful and attractive region of France.

There is too much to see and to do in the « Perigord Noir » (Black Perigord): 1001 castles from the Middle Age and the Renaissance periods, over 150 prehistoric sites and decorated caves – including the world-famous Lascaux – lovely medieval villages and towns full of character, busy outdoor markets, and incredible natural landscapes.

And there is also so much to eat! The Perigord is one of France’s major gastronomic regions. The traditional cuisine of the Perigord features local products such as duck, goose, walnuts, truffles, wild mushrooms and strawberries.

Here is a non-exhaustive list of want you can do and see in the Black Perigord.

Fall in love with its charming historical villages 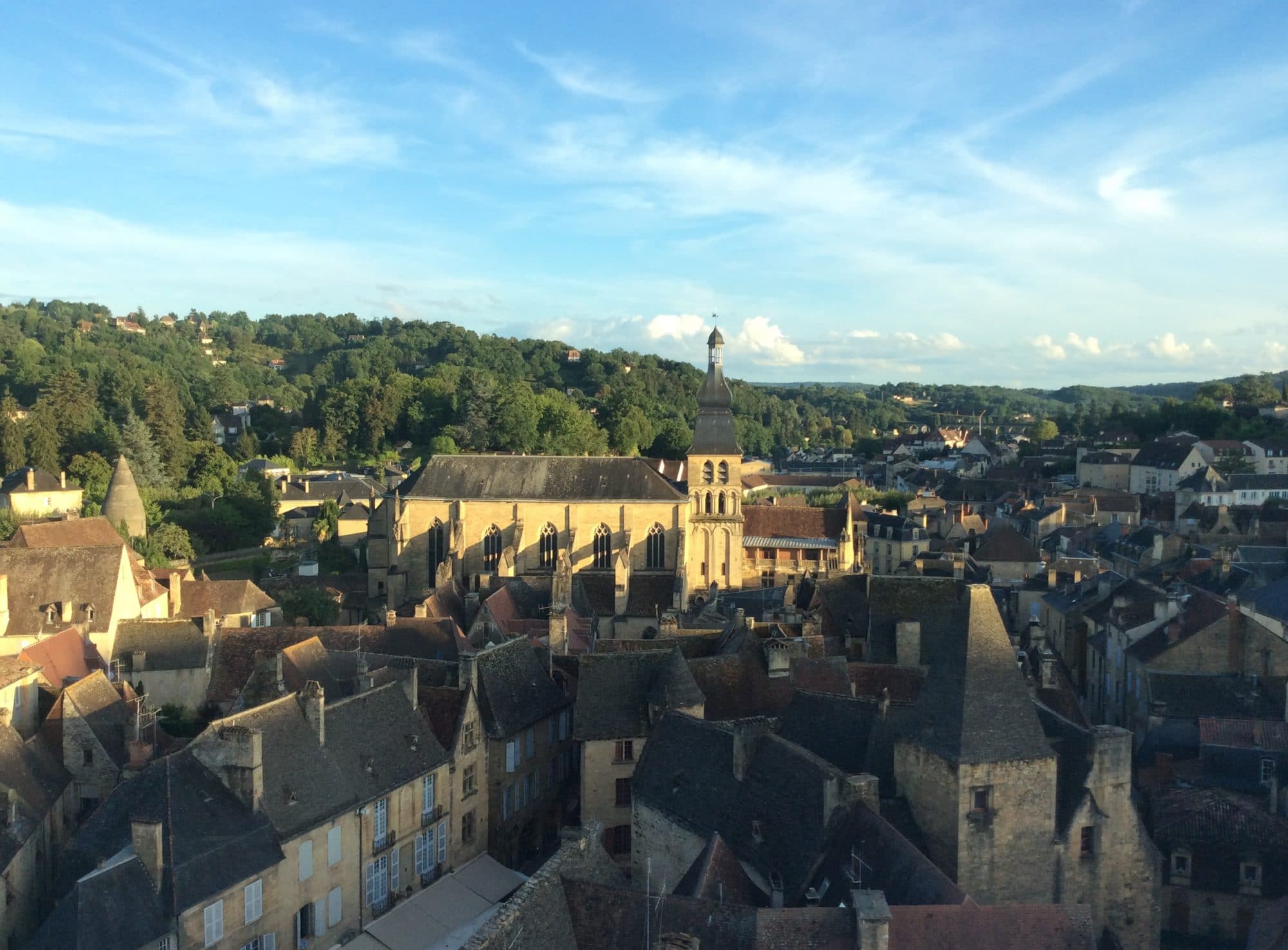 The Black Perigord is first of all internationally renowned for the beauty and the authenticity of its old stone villages. Limeuil, this medieval city located at the confluence of the Dordogne and the Vezere rivers, and its gorgeous panoramic gardens overlooking the region; La Roque-Gageac, this stunning village at the foot of a cliff on the banks of the Dordogne; BelvËs and its seven bell towers; the royal French bastide, Domme and the fortified English town, Montpazier, but also Beynac, St-Jean-de-CÙle, St-Amand-de-Coly, St-

Léon-sur-Vézère, Castelnaud-la-Chapelle… all these Perigordian villages are listed as « Most Beautiful Villages of France » and are worth a visit!

They are very close to Sarlat, making it an ideal starting point for your trips into the Perigord. This jewel of the Renaissance and Medieval periods is one of Europe’s biggest protected sectors.

What makes the Sarlat area so special is its irresistible combination of history, culture and traditions which create a unique atmosphere where each street, alleyway and stone tells a story.

There are 77 listed monuments you can discover in Sarlat, including Saint-Sacerdos Cathedral and the famous poet Etienne de la Boëtie’s birthplace, or you can take the recently built panoramic lift, designed by the architect Jean Nouvel, located in the bell tower of the former Saint Mary’s Church and enjoy a 360° view of Sarlat 40 metres above the ground. Moreover, Sarlat is an inspiring city: Many films such as ìJoan of Arcî and ìThe Visitorsî have been shot there.

Don’t miss a visit to these fascinating and picturesque towns.

Discover its underground treasures
The Black Perigord invites the curious among us to discover the incredible underground world: A huge concentration of decorated caves, refuges of the homo sapien man years ago, and fantastic chasms such as the giant Proumeyssac , which took a thousand years to form, can be found there.

The Black Perigord is home to more than 60 prehistoric sites and most of them are registered UNESCO sites, such as the world-famous Lascaux’s prehistoric cave located near Montignac. Today, the cave is no longer open to the public, but the site of Lascaux II is the exact replica of the original paintings made by our ancestors.

In addition, in Les Eyzies de Tayac and the surrounding villages you can find series of prehistoric treasures such as paintings in the caves of Font de Gaume – last cave opened to the public – and Combarelles, orexplore crystallizations in the Grand Roc cave which is a true mineral forest. Les Eyzies de Tayac is one of the most interesting, fascinating and beautiful place in the world. It is at the heart of this world prehistoric capital that the National Prehistoric Museum stands. Re-opened in 2004, this museum has the largest Paleolithic collection in France. 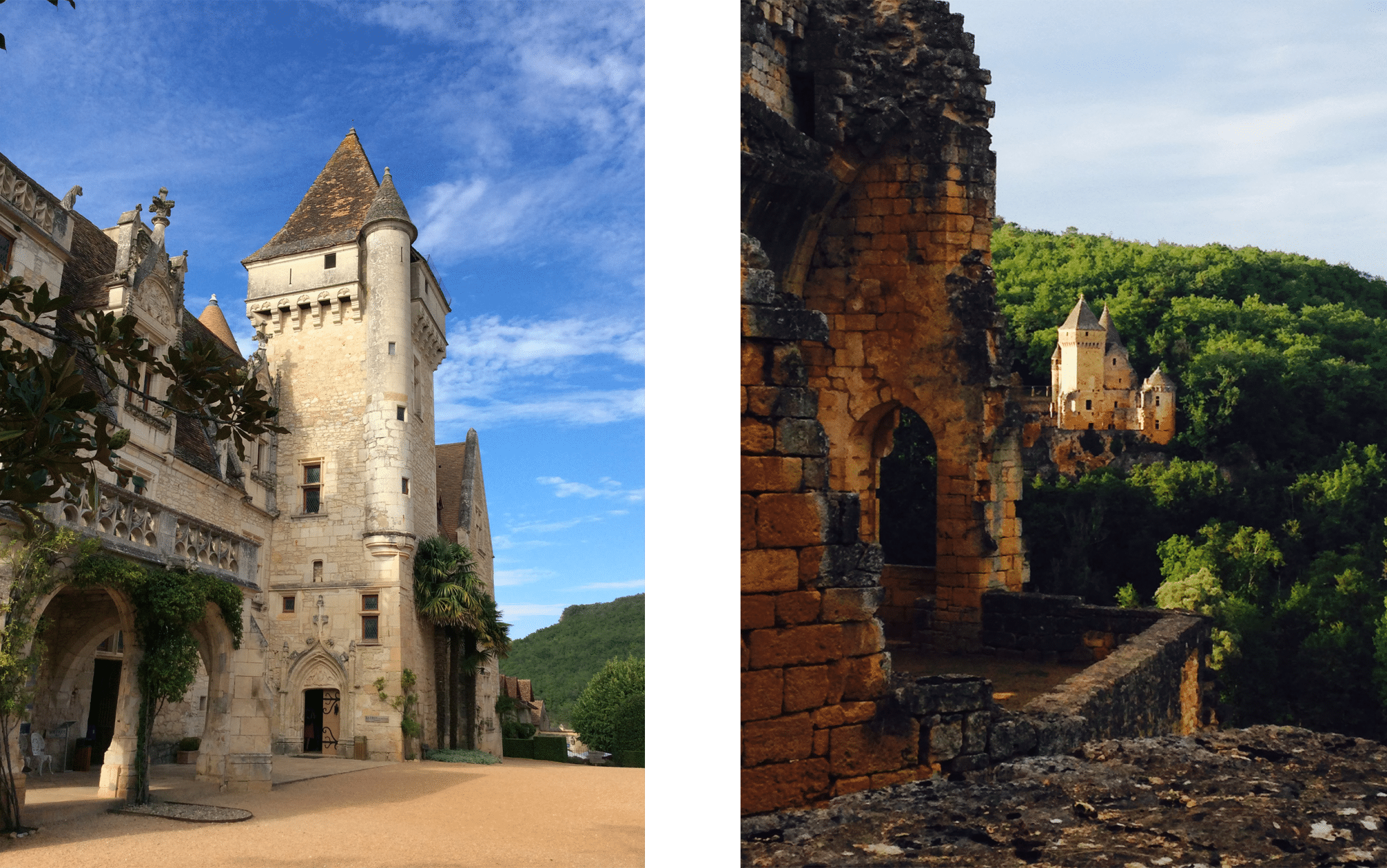 It is said that the Perigord is the land of 1001 castles. Difficult to say if it is true, but there are for sure numerous medieval castles and fortresses of different architectural styles that you can visit such as the Castelnaud Castle which is southern France’s most popular and visited castle – It is the kind of castle every child dreams of. It offers splendid views of the village of La Roque Gageac, Beynac Castle, its eternal rival, and of the delightful hanging Marqueyssac gardens. Moreover, you can assist to shows featuring medieval weapons every day at Castelnaud Castle.

Another reputed castle but much more romantic is the Milandes Castle – the former home of Josephine Baker, the international singing star. The place kept all its feminine charm and serenity with its garden, fountain and old magnolia trees.

These amazing architectural treasures, with their sculpted stones and towers which blend naturally into the landscape, offer you a chance of unforgettable discoveries, and will enchant you with its unique history.

Relax in its marvellous gardens
Go for a walk in the gardens of Marqueyssac which were designed by a student of André Le Notre – famous designer of the gardens of the Chateau de Versailles ñ and are one of France’s listed « Most Beautiful Gardens of France ». There are 6 km of walks but the promenade is worth it. You will also find several quiet areas where you can picnic, contemplate the amazing view of the Dordogne Valley and relax.

Or choose Eyrignac gardens which is an indisputable leader in terms of the art of Topiary making it also one of the « Most Beautiful Gardens of France ». Eyrignac represents 10 hectares of sculpted plants and is located between Lascaux and Sarlat. Every Monday night during the summer, from the 13th July to 17th August, expect a festive atmosphere and good company at the Eyrignac gardens – Happy Picnic is the new attraction of the summer : singing and dancing all night and… in white. 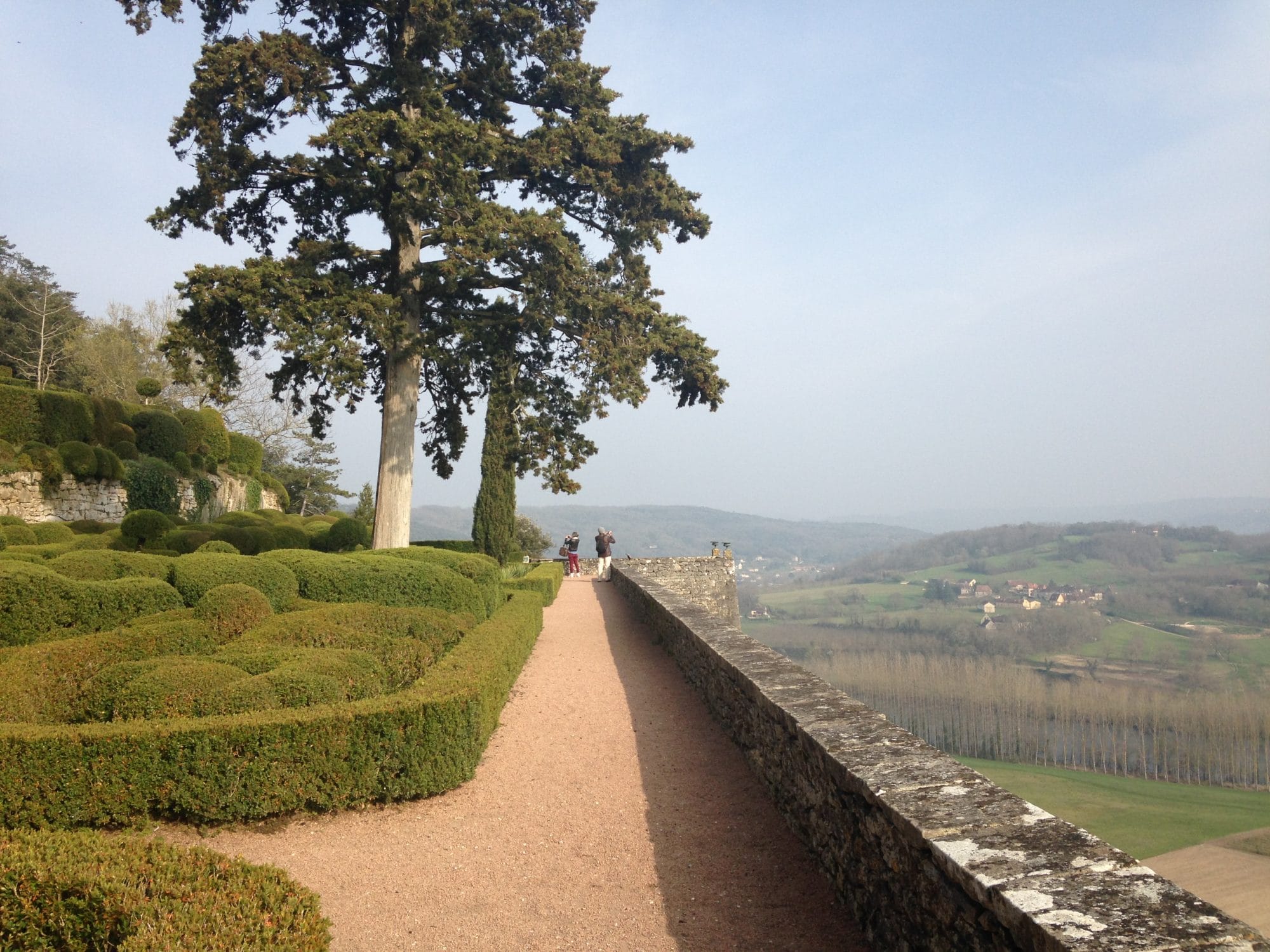 Experience original and thrilling activities
The Black Perigord offers an unspoilt nature and grandiose landscapes – Perfect for all sorts of outdoor activities.

You can discover the hidden beauty of the region by hiking, horse riding, or biking. But you may also like to take a boat trip. Then, hop on one of Beynac’s gabarre, a traditional boat which was used to carry goods to Bordeaux, and discover Perigord’s beautiful surroundings and impressive castles.

The region is a sort of « giant playground » for children but also for adults. There are plenty of entertaining and exciting activities that you can enjoy in the Perigord: Go canoeing or kayaking and discover the region from the river with its rich and diverse wildlife, try out the new rising sport, « Stand Up Paddle » or climb aboard a hot air balloon and enjoy a unique way to discover the natural and cultural heritage of the Black Perigord.

Do you want to discover the Black Perigord differently? Then you must try the « Via Ferrata » at the gardens of Marqueyssac – A truly thrilling activity! It offers an acrobatic cliff course of 200 meters long and approximately 100 meters above the Perigord.

Taste its exceptional gastronomy
If you are planning a trip to the Black Perigord, you’re in for a unique culinary experience – It’s the paradise of gastronomy!

The Perigordian cuisine features duck with the best known specialties, the confit de canard and the magret de canard, but also trout from the rivers, wild mushrooms from the forests, walnuts, sweet chesnuts, Cabécou goats’ cheese, truffles and of course the world-famous foie gras.

There are numerous restaurants in the Black Perigord where you can taste excellent regional specialities such as La Petite Tonnelle located in Beynac that offers a gourmet cuisine according to the day’s market products. In Marnac, there is a traditional farm/hostel called Les Tilleuls that produces everything you eat. In Trémolat, Chef Vincent Arnould welcomes you at Le Vieux Logis with a creative and original cuisine, and for a more modern cuisine, try l’Esplanade in Domme: This restaurant offers a gorgeous view on the Dordogne Valley.

The inhabitants of the Perigord, and particularly of Sarlat, are proud of their gastronomy… and they show it:

Each year, on the 7th and 8th of March, Sarlat celebrates Fest d’Oie to pay tribute to their geese. You will watch them parading in the streets, assist to goose butchering demonstrations and eat goose carcass soup.

Mid-January, the Truffle Festival takes place in Sarlat – An event to pay hommage to Perigordís « black diamond ». It is the hottest gastronomic date of the year. No gourmet should miss it!

Sanbao Events will be delighted to organize a tailor-made journey in the Black Perigord for your company : the region has 5-star and charming hotels, modern infrastructures adapted to today’s requirements and other venues such as bastides, castles that can be privatized for your seminar, incentives and other professional events