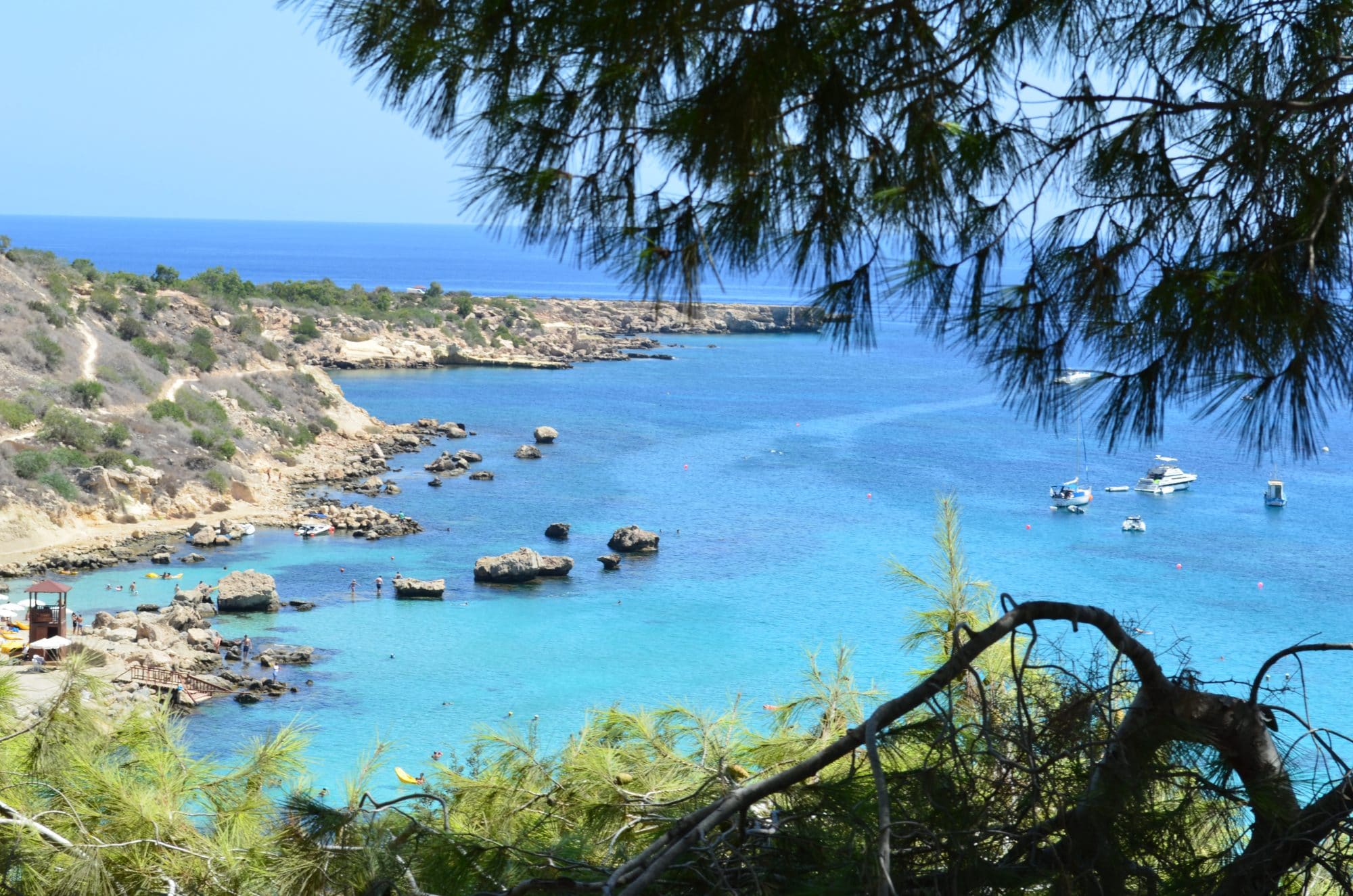 From our wonderful correspondent Aurore, in Cyprus

Spring is coming and the sun is showing its teeth after an intense winter’s month on this small island located in the borders of the Eastern Mediterranean that is Cyprus. So if you are looking for a sunny destination for the months to come, look no further, you are on the right page!

The mountain wins your heart ! The crystal waters also …

Cyprus is known as the “island of love”, the legendary birthplace of Aphrodite, goddess of love and beauty! The third largest island in the Mediterranean, is ranked among the best for its climate and the quality of its bathing waters, but also for the diversity of its landscapes.

From the coast, lined with sandy beaches and rocky coves, sharp limestone cliffs and palm groves, to the mountain range of Troodos in the center of the island, dotted with virgin pine forests and uninhabited on one hand, and small stone villages with well preserved ancestral traditions on the other; Cyprus offers a variety of landscapes and spectacular contrast with relatively short distances allowing its visitors to enjoy everything even during a short stay. It’s the ideal place for your incentive trips!

The “Mediterranean Diet” worthy of its name in Cyprus

Cypriot cuisine is very varied, influenced by different cultures by its history and its different colonizations. The use of olive oil and the freshness all year of its fruits and vegetables make the island a destination renowned for its gastronomy and an unprecedented food example. And if the “Mediterranean regime” or “Cretan regime” is already well known, the “Cypriot regime” will soon be!

The new generation of chefs who studied abroad and traveled extensively before returning to Cyprus, introduced a new cuisine, fusing international dishes and local recipes. The choice is varied in Cyprus between contemporary restaurants and local taverns. But your stay will not be complete if you do not taste the famous “meze Cypriot”, including thirty dishes (grilled meats, salads, sauces etc) and allowing you to taste all the specialties and flavors of the country!

Wine is also often used to complement local cuisine in addition to fresh herbs and spices. With its long history in the wine sector, Cyprus has proved its extremely important role for Europe as a whole by bringing the knowledge and know-how necessary for the development of the art of winemaking in the rest of the continent. The oldest wine Commandaria dates back to 1192, when the Knights of the Order of Saint John settled in Kolossi, Limassol.

The two very modern international airports (of Larnaca and Pafos), the excellent road infrastructure, the conference centers and the state-of-the-art audiovisual equipment, the variety of exclusive venues and luxury Spa hotels, the quality of services with dedicated staff, attentive to detail and outstanding results, make Cyprus a perfect destination for conferences, seminars and incentives!

A rich culture and history dating back 10,000 years

The island’s cultural heritage of 10,000 years of history includes many archaeological and historical sites, testifying to the Stone Age and the many civilizations that have marked the island for centuries; such as Greco-Roman theaters, Egyptian tombs, Byzantine churches, and many more.

You are spoiled for choice with this plethora of archaeological sites, historical monuments and mythical places that abound Cyprus, and all as spectacular as each other, to enrich your stay and organize cocktails or private dinners during your events!

Cyprus is a beautiful island with many qualities of which it can be proud. His distinction, however, lies in the hearts of his people and their hospitality.

The history of the island, which grew in its soul rather than in the many monuments, is richer and older than most other countries in this region. Cyprus offers its visitors not only a fantastic sunny climate but also and above all a feeling of well-being.

At a time when travelers are increasingly worried about their safety, Cyprus has managed to preserve its serenity and tranquility during all these years, the pride of its inhabitants, that I invite you to meet with the Sanbao team!

From April 4, 2015, the Greek airline Aegean Airline will offer three flights per week between Larnaca airport and Paris-Charles de Gaulle, operated by 168-seat A320s. Departures are scheduled Monday, Thursday and Saturday at 12:50 (arrival 16:30), the return flights taking off at 17:20 (arrival 22:20).

From Paris it takes a flight time of about four hours. For your international meetings, know that Cyprus is served by direct flights from thirty airports in Europe and the Middle East. European citizens only have to present their identity card to enter the territory of the Republic of Cyprus, while other nationals need Visas – obtained however very quickly thanks to the agreements between Cyprus and the countries of the Middle East, Africa and Asia.